IHTS consultants can show part makers how to reduce or completely eliminate long, batch carburizing cycles and still provide higher levels of beneficial residual compressive surface stresses in a through-hardened part. The higher the residual compressive surface stresses, the longer the part cyclic fatigue life that can be expected. This is because the surface compression holds the part like an invisible die and this compressive force between the grains must be overcome before the part will begin to bend and then fatigue.

The reason that case hardening of a martensitic steel part imparts surface compressive stresses is the crystalline structure in the martensite shell is Body Centered Tetragonal Iron (BCT). BCT grains have a larger volume than the Face Centered Cubic structure in the austenitized surface layer. The larger volume BCT grains literally press against each other and the contiguous grains in the “case” creating hardness and strength under compression.

The martensite not only imparts hardness (strength), but the compressive stresses will also help resist bending fatigue in the hardened layer. One way to increase surface compression is to case harden the part by heating only the shell of the part (by selective induction or flame heating) to the austenitizing temperature, keeping the core cold, then quenching to produce a martensite shell. Since the core remains soft, there is no martensite phase change swelling to BCT to reduce the compression in the martensite surface layer.

Beneficial surface compressive stresses can also be induced into the surface of the part by mechanical shot peening after hardening.

A third way to impart beneficial compressive surface stress is through carburizing the surface, adding carbon atoms to the steel part surface layer then hardening that layer by quenching. During the high temperature carburization process a carbon rich gas atmosphere diffuses carbon atoms in the part surface layer raising the percentage of carbon from the base carbon steel (usually .10% C to .20% C) to .70% C to 1.10% C. The higher the carbon percentage in the case gradient, the greater the hardenability of the austenite will be when quenched from the austenitizing temperature (~ 1550○ F / 843○C). When a case carburized part has between .65% C to 1.10% C diffused in its surface layer and the carbon is diffused into the shell to required case depth, it is ready to be quenched.

The additional atoms of carbon also adds volume to the grains creating compression in addition to the higher volume martensite BCT grains. As shown below, the higher the percentage of carbon, the higher the hardness in the steel as quenched. 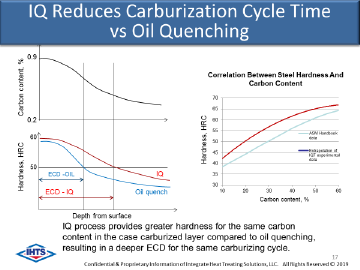 In addition, the faster the hot austenite is quenched for a given level of carbon diffused into the case, the higher the as quenched hardness in the case at that depth of diffusion; a minimum 50 HRC is usually considered to be the measure of the “Effective Case Depth” (ECD). The oil quench needs approximately .30% C to achieve a minimum level of 50 HRC in the case. The intensive water quench only needs .02% C in the case to achieve 50 HRC minimum for the same ECD. This means that an intensive water quench cooling rate when applied to a carburized part significantly reduces the carburizing cycle times by 30% to 50% compared to a traditional oil quench to achieve a minimum hardness of 50 HRC ECD.

The physical mass of the carbon atoms diffused into the case also increases the compressive residual surface stresses in the hardened martensitic case. Combined with the austenite to martensite phase change expansion, the added mass of the carbon atoms increases the volume of the crystalline structure that puts the case under higher compression than it would be for a “through-hardened” part of similar carbon content.

As the surface shell quenches and martensite phase change volume expansion occurs, and like layers of an onion, the layers below will also expand. Depending on the thermal gradient and the timing of the formation of layers of martensite on the surface shell, the swelling below the shell will partially or fully cancel the compression formed in the layers above. This phase change expansion below the surface and cancellation of compressive stress in the layers above can be so complete that depending on the timing of the expansion relative to when the shell was formed, in high hardenability steels the core swelling can blow off the hardened surface layer and crack the part. See the graphic below. 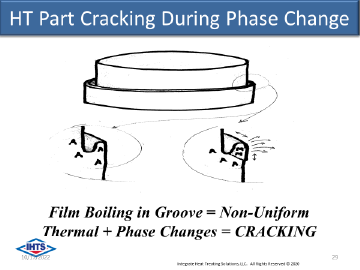 Therefore, if a part is through-hardened, the initial surface layer of compression (formed as the surface shell cooled to higher volume martensite) can be cancelled as the part layers below cool to the martensite start temperature and begin to swell. So, a higher hardenability “better alloy” steel used for either a case hardened part or a through-hardened part can be detrimental to the formation and retention of beneficial compressive surface stresses and actually reduce cyclic fatigue life. This lower cyclic fatigue life is due to a combination of the higher core hardness that has less ductility and also the reduction of residual compressive stresses that resist the bending fatigue at the surface.

IHTS consultants can show the part designers how to overcome the cancellation of the beneficial surface compressive stresses in the surface shell by limiting the core swelling in high hardenability steels (e.g., 52100) by using IHTS’s patent pending Dual Austenitizing Temperature (DAT™) Heating method and an integrated High Pressure Instant-Impact Quench (HPIQ™). The key is to form high “current” compressive surface stresses in the martensite surface shell as uniformly as possible over the hot core that has been “under-austenitized”. This combination creates a very high thermal gradient between the cold martensite surface shell and the thermally swollen austenitic core. A uniform and intensive cooling rate at the surface very quickly forms the martensite shell and creates high “current” compressive stresses in the surface shell. As the thermally swollen core shrinks, it will draw down the surface shell under even higher compression. If the intensive water quenching surface cooling rate is then interrupted when the core is still above the martensite start temperature, and the part allowed to finish cooling in the air, the transformation in the core is slowed, and the associated core swelling at martensite start is likewise slowed. The combination of an initial uniform and intensive water quench cooling rate, the DAT Heating to reduce core swelling and the interruption of the intensive quench cooling at the time of maximum current compressive surface stress, will allow the formation of optimal residual compressive surface stresses in even high hardenability, “through-hardening” grades of steel. See the graphs below from actual quench probe data, DANTE Solutions FEA modeling and X-Ray diffraction data for residual stress states. 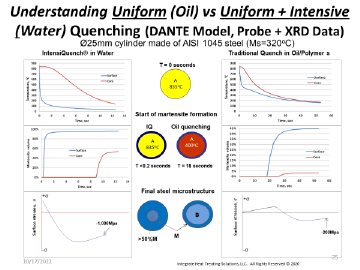 An added benefit from the uniform and intensive quench is a finer grain structure from a given alloy of steel. 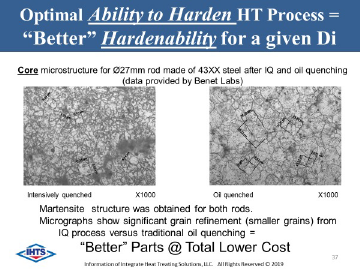 The current compressive stresses in surface shell also hold the part like a die over the hot, still plastic, core. Once this hard and uniform surface shell is formed, it holds the core as it cools by uniform conduction. The uniform cooling of shell and the core make the size change more predictable and consistent. Uniformly and intensively quenched gears can actually be machined before heat treat so that they will “quench to fit” after quenching into a near net shape that needs less hard machining or grinding.

The elimination of the long, energy intensive, batch carburization cycle also makes in-line, single-part flow a reality for “case hardened + core toughened” parts. With single-part induction through-heating, automated part handling and uniform and intensive water quenching, the complicated atmosphere generators and controls for the carburization process can be eliminated further leaning out the manufacture of case hardened parts. IHTS consultants can show the part maker how to fully integrate the heat treating processes into their part manufacturing cells.

Want to learn more about optimizing your parts for lean manufacturing?
Schedule a consultation today!