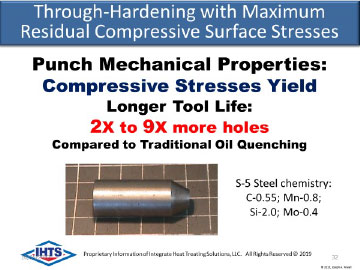 The expected failure mode for an S-5 tool steel cold working punch is chipping of the cutting edge after making a certain number of holes. After a traditional hardening process, an oil quenched and tempered punch is 60-61 HRC; it does not have much ductility and has a residual surface stress state that is tensile at approximately +200 mPa or +29,007 PSI under tension.

In contrast the residual surface stress state for the intensively water quenched punch is highly compressive at - 900 mPa or 130,534 PSI of compression between the hardened part’s grains. This means that while the oil quenched punch cutting edge is under tension and “primed to chip” with 29,007 PSI of force pushing grains off the cutting surface, the surface grains of the intensively water quenched punch are being held in place with an invisible “dies” of combined hoop and axial compressive forces with over 130,000 pounds of force per square inch to hold the cutting edge. So, after an intensive water quench, the same material and same design punch, tempered to the same hardness (60-61 HRC), will punch 2 to 9 times more holes before having to be replaced. The failure mode for the intensively quenched punch is not chipping, but even wear and the punch becomes undersized and can be replaced. 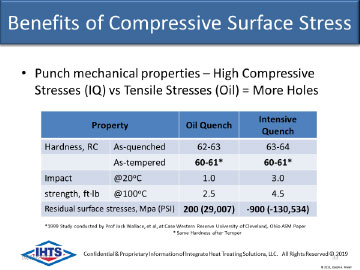 The as-quenched hardness is about the same whether the S-5 punch is oil quenched or water quenched – 62-63 HRC for oil and 63-64 HRC for water, and after tempering the hardness is made identical at 61-62 HRC. The reason the same design, made of the same material, hardened to the same final hardness can offer a much better value proposition (“many more holes per dollar”) is the higher level of beneficial compressive residual surface stresses* created during the intensive water quench and not in a traditional oil quench. (*Surface stress state was measured at Case Western Reserve University by X-ray diffraction).

This combination of optimal surface hardness, core ductility and a compressive surface stress state enable the uniform and intensive water quenched tool to punch more holes per dollar invested in each punch. 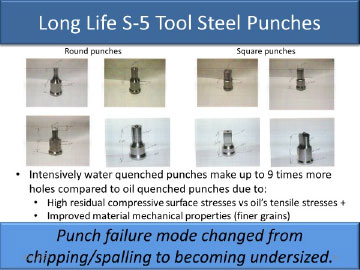 The result?
More holes made per dollar invested. Since the customer is “buying holes,” and not punches, the tooling maker delivering a better value to the end-user while enabling a higher profit margin per punch.

Want to learn more about optimizing your parts for lean manufacturing?
Schedule a consultation today!